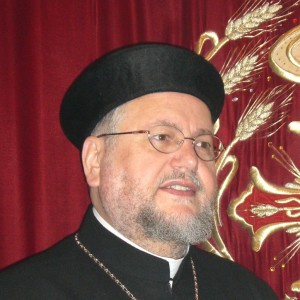 On Feb 28, 1949 Fr. Samuel was born in Tanta Gharbia, Egypt, he is the youngest son from a devoted Christian family. His father, the late Mr. Thabet, used to take him regularly to the church even for the vigil services; he taught him since early childhood to pray in the Book of the Daily Prayers.

On 1954 he was ordained a Deacon by the late Metropolitan Thomas in the Church of St. George, Tanta. Since that time, he continues in serving the altar of the Lord.
On 1960 the family moved to Alexandria, then joined the Church of St. George, under the mentoring of the late Fr. Bishoy Kamel he served also the altar of the Lord, and in Sunday Schools.
Since his childhood he was also mentored in the spiritual path by his uncle the late Fr. Matthias El-Baramousy, it happened during his seasonally visits to the family, also during most of the summer vacations, which the youth Samuel used to spend in the Monastery where his uncle was a monk
On June 1972 he graduated from the Faculty of Engineering, University of Alexandria, with a Bachelor degree in Civil Engineering.
Late that summer, he started his service in the army till July 1975, and then he started working in a construction company for foundations.
On May 4, 1975 he married Tassony Ebtesam El-Neil from a priestly family, and a Sunday school servant.
He was nominated by the late Fr. Bishoy and the congregation, to be a priest for St. Mary Church in Cleopatra, Alexandria. On Sunday June 27, 1976 H. H. Pope Shenouda III ordained him a priest by the same name given to him by birth. The ones bishops who were also ordained that same day are as follows: His Grace Bishop Bishoy of Domiat, His Grace Bishop Hedra of Asswan, His Grace Bishop Amonious of Luxor, and His Grace Bishop Beyameen of El-Monofia. From the priests who attended, the late Fr. Bishoy, Fr. Antonious Thabet, and the late Fr. Shenouda Abdel-Messieh.
On September 3, 1981 Fr. Samuel was imprisoned among the 24 priests and 8 bishops by the orders of the late president, Anwar Sadat. On Feb. 22, 1982 he was released, but was not allowed by the authorities to serve in his church.
On July 1983 H. H. appointed him to serve the Church of St. George, Philadelphia, PA, USA, in addition to serving the churches of Wilmington, Delaware and of Atlantic City, NJ.
On July 7, 1990 H. H. appointed him to serve the Church of St. Mark in Chicago, since that time till the present time he is serving in it.