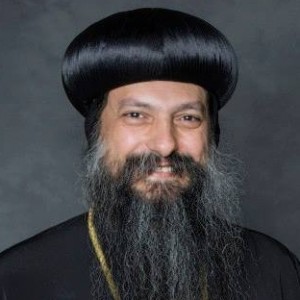 His Grace Bishop David was born on August 7, 1967 in Cairo, Egypt. In 1984, at the age of 17, he emigrated to Toronto, Canada with his family, where he attended York University. His Grace graduated from York with a Bachelor of Science degree in Biology in 1991.

In March 1992, His Grace joined St. Pishoy Monastery as a novice, and was ordained a monk on January 22, 1995. His Grace was ordained a priest on October 21, 1995 and served at the Diocese of Birmingham in the United Kingdom from November 1995 until November 1999. In November 1999, His Grace was ordained as a General Bishop by the Thrice-Blessed Pope Shenouda III of Blessed Memory. That month, His Grace was also appointed as the Patriarchal Exarch at the Archdiocese of North America in Cedar Grove, New Jersey and entrusted to oversee the papal residence and non-diocesan Coptic communities throughout North America. His Grace has since earned two Master’s Degrees, his first in Pastoral Counseling from Fordham University in New York in May 2010, and his most recent in Theological Studies from Holy Cross School of Theology in Boston in May 2013.

His Grace has represented the Coptic Orthodox Church in various conferences, including, most recently, the Assembly of the World Council of Churches in South Korea in October 2013. His Holiness Pope Tawadros II, with the Holy Synod of the Coptic Orthodox Church, consecrated His Grace as the first Shepherd and Diocesan Bishop of the newly formed Coptic Orthodox Diocese of New York and New England in formal ceremonies taking place in Cairo, Egypt on November 16-17, 2013.