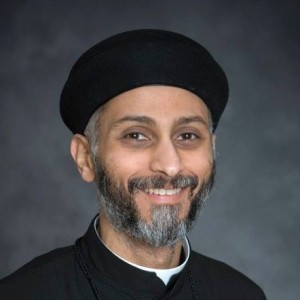 Fr. Daniel holds a dual degree in Chemistry and International Relations from Knox College, a Master’s degree in Community Counseling from Loyola University Chicago, a Master’s degree in Information Systems Management from Northern Illinois University, an M.B.A. from Northern Illinois University and a J.D. specializing in Intellectual Property Law from the John Marshall Law School. Fr. Daniel was pursuing his post-law LL.M. degree when he was called for priesthood.

As a practicing attorney for almost seven years, Fr. Daniel worked at a global law firm of 1,600 lawyers worldwide representing technology companies in patent, trademark, copyright, trade secret and licensing matters. He was admitted to the State Bar of Illinois, U.S. District Court for the Northern District of Illinois, and further admitted to the Patent Bar of the United States Patent and Trademark Office. Fr. Daniel also taught Continuing Legal Education on Patents and Open Source Software to attorneys in Pennsylvania and Illinois at the Pennsylvania Bar Institute and Northwestern University.

Fr. Daniel served in the Coptic Orthodox Church since he was nine years old, first as a deacon, then as a Sunday School teacher and later as a youth group and college missions leader. Using his bachelor’s degree in International Relations, Fr. Daniel researched the history of Coptic persecution in Egypt. Using his Master’s in Counseling he also served in the Coptic Church as a marriage counselor for nearly 14 years.

By God’s grace, he was ordained as a priest to serve at St. Maurice & St. Verena Coptic Orthodox Church in Toronto by the blessed hands of His Holiness Pope Shenouda III on November 30, 2010.