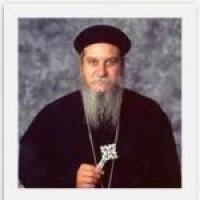 Father Athanasius Shoukry Ragheb was born on September 14, 1949. He earned a Pharmaceutical Bachelor of Science Degree in 1973. He came to California in 1981 and worked as a pharmacist until 1993. He was a Youth Leader and Sunday School Teacher at Archangel Michael in Santa Ana From 1989-1993.

He was ordained Presbyter by His Holiness Pope Shenouda III on November 14, 1993. He has been serving at Archangel Michael in Santa Ana ever since.

He was elevated Hegomen by His Holiness Pope Tawadros II on October 18, 2015. He is now serving the church of Pope Kyrillos the Sixth in Westminster, CA.