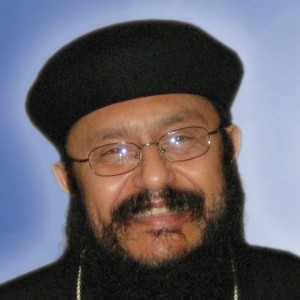 On January 6th 1957, Eliya Ayad Sorial was born in the city of Khartoum, Sudan.  He was one of seven children born to pious parents that raised their family to love Christ the Lord. Eliya Sorial loved God and loved serving others. Because of this love, he enrolled in Khartoum Medical University where he majored in physiology and earned his M.D. in April of 1981. There, he taught at Khartoum Tutorial College.  Following Eliya’s graduation, his elder brother Sorial Ayad Sorial, the late H.G. Bishop Karas (may the Lord repose his soul), left the world to become a monk in the Monastery of St. Bishoy in Egypt.

On June 1st 1985, Eliya Sorial was united in Holy Matrimony to Amal Sami Zaki in the Church of the Holy Virgin Mary in Khartoum.  Shortly after, they brought into the world their first child, Jessica, on March 24, 1986. As a family, they migrated to England, where Eliya continued to excel and received his Ph.D. from London University in 1989. Within the same year, H.G. Bishop Karas was sent to head the Monastery of St. Anthony the Great in California after being ordained a Hegumen by H.H. Pope Shenouda III.  While continuing his education, their second daughter, Monica, was born on April 17, 1987.

His reputation as an accomplished doctor was well known and he was invited in 1990 to teach at Hong Kong Medical University in China.  Before making this transition, their third daughter, Irene, was born on July 8, 1990.  Within a year, Eliya made the decision to return to England because he wanted to raise his family in the Orthodox Church.

In 1993, the Holy Synod recognized the Monastery of St. Anthony as flourishing, bringing large numbers of visitors coming to seek its blessings.  Hegumen Karas was then ordained bishop and abbot of the monastery; H. G. Bishop Karas the first Coptic Orthodox bishop in the land of immigration.

After returning to England, their fourth child, Abanoub, was born on May 13, 1994.  Later that year, Eliya Sorial was ordained as Father Sorial Sorial by H.H. Pope Shenouda III at the monastery of St. Anthony the Great in California on October 4th 1994.  Fr. Sorial was ordained to the altar of St. Mary and St. Abraam Coptic Orthodox Church in Brighton, England.  There he served the congregation with love and joy for nearly two years until H.H. Pope Shenouda III sent him to minister at St. George and St. Shenouda Coptic Orthodox Church in Jersey City, NJ.  He served with Fr. David Bebawy and the Late Hegumen Fr. Antonious Ragheb (may the Lord repose his soul).

Fr. Antonious fell ill and departed to the Lord in 1998, leaving Fr. David and Fr. Sorial to shepherd a congregation of about 1,800 families.  Earlier that year, H.G. Bishop Karas was diagnosed and struggled with lung cancer and his soul departed on January 17, 2002.

In 2005, the congregation was blessed with the ordination of Fr. Anthony Basily.  With the continuing growth, H.H. Pope Shenouda III sent Hegumen Fr. Makarious Sawires to serve with Fr. David, Fr. Sorial and Fr. Anthony in 2006. On February 7th 2007, Fr. Sorial was elevated to Hegumen.

As a priest, he touched the hearts of all and exemplified the love of Christ. Among the congregation, he was commonly referred to as Fr. Sorial the Beloved. He saw Christ in all and loved each person as his own child, brother or sister. He humbled himself, serving others first through fasting and prayers. Yet, his actions always spoke louder than his words. He constantly made visits to the sick in the hospitals that were unable to partake in the Holy Communion. His humility was always very evident in the way he carried himself and he truly set an example for us. He always made it a point to ask of the congregation to pray for him, especially the youth of the church.

Father Sorial was always one to support the youth and their ambitions. When FTFT! first came to be, he realized the passion within the youth group and encouraged their services. He pushed for involvement of the youth as he believed that they are the future of the church and the life of it.

He had a true passion for church hymns and liturgy. He projected his zeal during liturgies as he wept and called out to our Father, Jesus Christ. Even as he lay ill, he had a strong desire to worship and praise as he normally would if in health. On many occasions, priests along with deacons accompanied him in the hospital so that he may partake in Tasbeha since he could not physically attend church services. His strong love for praise was revealed as though it ran through his veins.

In the latter part of 2007, Fr. Sorial fell ill and was diagnosed with pancreatic cancer.  Many came to receive the blessings of this great father while he was in the hospital, including laymen, deacons, priest, bishops and H.H. Pope Shenouda III.  On February 15th 2008, Fr. Sorial departed to be with our Lord and Savior Jesus Christ.  Many saw him as an angel living amongst us and the heavens rejoiced in receiving our beloved father, who has gone to the paradise of joy.

Beloved Fr. Sorial, we ask that you keep us in your heavenly prayers and continue to watch over your children and your flock.  We are truly blessed to have had you live among us as you brought us closer to the Lord.  May your teachings continue to resonate in our hearts and lives.  Abouna Sorial you have touched so many with your meek and humble heart.  And though it was hard to accept, we’re glad that your eternal journey has come to a start.

May his soul rest peacefully in the bosom of our Lord in the paradise of Heaven.