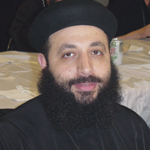 On September 26, 1969 Yehia and Madelen Basily welcomed Ashrif Basily into the world.  Ashrif was the younger of two boys born to the Christian couple.  Born and raised in Bani Swaif, Egypt, Ashrif has been a very dedicated servant to the Coptic Orthodox Church.  From a very young age he was ordained a deacon and served his local Church, St. Mary in Bani Swaif diligently.

As a lay-person Ashrif Basily dedicated himself to service for the youth of his church in Egypt because of his love for them; his performance in these services was nothing short of astounding. His responsibilities varied from organizing meetings to handling church youth activities.  His second passion was a commitment to a program that reached out to the underprivileged villages around Egypt.  He spent numerous days traveling from village to village preaching and visiting the sick and less fortunate.

During the Late 80’s Ashrif immigrated to the United States where his service started to grow rapidly. He began his service at St. George and St. Shenouda Coptic Church in Jersey City, NJ.  Because of his tremendous love towards his brother and sisters in Christ, Ashrif began serving those who have newly immigrated to the United States. His responsibilities were limitless and included; finding jobs and homes and solving immigration problems.

On September 8th, 2002 Ashrif and Jacqueline became husband and wife and joyfully welcomed two beautiful daughters into their family; Julianna on November 20, 2003 and Miriam on September 24, 2005.

In 2005 Ashrif was chosen by our Lord God and Savior Jesus Christ to become Fr. Anthony ordained to the service of St. George and St. Shenouda Coptic Orthodox Church.

Fr. Anthony, is a model servant who has shown us the true meaning of being a servant. His influence on the youth of St. George and St. Shenouda has been incredible. It is very clear that God has chosen him because he is a worthy shepherd to guide his children.