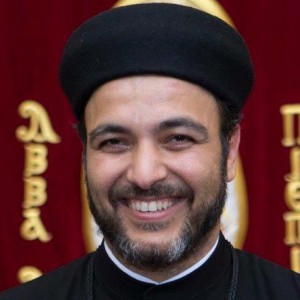 Fr. Joseph Loka was born in Souhag, Egypt on April 1, 1976. He was then called Amir Anwar Sadek Loka.

When Fr. Joseph was in middle school, he moved with his family to Alexandria, Egypt. There he attended services in St. George Church, Sporting, Alexandria, Egypt. He became very actively involved in Sunday School ministry through out his college and early career years.

In 1998, he graduated from Pharmacy School - University of Alexandria, Egypt. Following his graduation, he worked for a pharmaceutical company for one year.

In 1999, Fr. Joseph immigrated to the United States of America and lived in Queens, NY. He was an active member and served the High School Sunday school service of St. Mary & St. Antonious Church in Ridgewood, NY.

In 2001 he moved to Vero Beach, Florida, where he worked as a pharmacist in CVS, and was an active member in Archangel Michael Church in Melbourne, Florida. He served the High School, Sunday school service, though out his time there.

Fr. Joseph has been actively serving our congregation since then. May our Lord Jesus Christ continue to bless his service for many years to come.