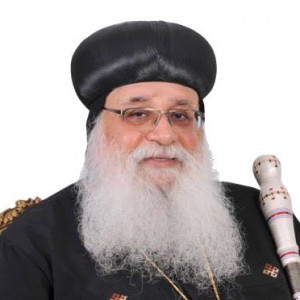 On May 30, 1985, Anba Arseny (then: Father Arsenious El Baramousy) established himself as the first Coptic Orthodox priest permanently in Amsterdam to be able to serve the Copts in the Netherlands. He was sent by His Holiness Pope Shenouda the third, Pope of Alexandria and the 117th successor of St. Mark the Evangelist.

Anba Arseny graduated from the Faculty of Medicine in 1975. On September 20, 1978, he became a monk at the El Baramous monastery in Wadi- Natroun, Egypt. He was subsequently ordained as a priest on May 30, 1979 and on March 2, 1981. He served in the diocese of Za'aziek and Minya el Amh as responsible for the spiritual care of youth from January 9, 1980 to January 24, 1982. Then he served as interim abbot of the el Baramous monastery from 11 February 1982 to 30 April 1984. His Holiness Pope Shenouda III chose him to serve the Coptic community in the Netherlands on 30 May 1985.

Because of his arrival, the Copts were looking for a church of their own, and they worked hard to find a suitable building. God led them to the current church building in Amsterdam North. On 2 October 1985, the purchase contract was signed and the church transferred. On Sunday, October 20, 1985, we mounted the first Holy Liturgy in the new church and we were happy with this new house of God. Then we were busy setting up the church in Coptic Orthodox style.

From July 1985 Father Arsenious visited The Hague twice a month, where most of the Copts live after Amsterdam. These visits were completed with, alternately, the commissioning of the Holy Liturgy and the holding of spiritual gatherings. Since January 1991, The Hague and surroundings have had their own priest. In 1994 the current church building was purchased.

In the south of the Netherlands where many Copts live, Vader Arsenious El Baramousy Eindhoven used as a base to serve this community. From June 1992, he dedicated the Holy Liturgy once a month and visited the local community. On 15 January 1998 the current church building in Eindhoven was purchased and named after the Holy Archangel Michael and Saint Anthony. Nowadays Eindhoven also has its own priest.

In the central Netherlands, Utrecht became the Coptic Orthodox center. In 1993 Father Arsenious El Baramousy collected the Copts for a Bible study meeting. This meeting later grew into a Holy Liturgy. At the beginning of July 1998, with the help of our Lord Jesus Christ, the present church building was purchased and named after the Martyr, Saint Mari Girgis and Saint Demiana.

Father Arsenious El Baramousy began serving the Christians in the province of Friesland in the north of the Netherlands in May 1999. In October 2000 the church of Saint Paul of Thebes was founded in Hilaard and the religious community there counts 25 Coptic families.

Father Arsenious El Baramousy began serving the Coptic Christians in the provinces of Groningen and Drenthe since February 1994 in the Northeast of the Netherlands. In September 2002, the church of St. Athanasius was founded in Assen, where the religious community consists of 50 Coptic families.

Father Arsenious El Baramousy started serving the Coptic Christians in the province of Overijssel in the East of the Netherlands in September 1995 and founded the church of Saint John the Baptist in Enschede. The Coptic parish has 25 Coptic families there. Father Yoiel El Baramousy is responsible for the St. Paul of Thebes Church, St. Athanasius Church and St. John the Baptist Church.

In the south-west of the Netherlands Father Arsenious El Baramousy started visiting the Coptic Christians in the province of Zeeland since 1999, and founded the Church of St. Arsenious the Great in Middelburg. The parish there counts 25 Coptic families.

The holy synod of the Coptic Orthodox Church has decided to set up a diocese for the spiritual care of the Copts in the Netherlands and Belgium. In the evening incense prayer of 15 June 2013 (9 Baoona 1729 AM), Pope Tawadros II, pope of Alexandria and patriarch of the Coptic Orthodox Church, pronounced the inauguration of Hegoemen Arsenious el Baramousy as the first bishop of this diocese, named Anba Arseny, bishop of the diocese of the Netherlands and Belgium.