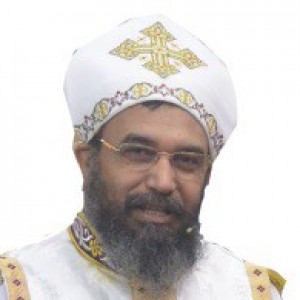 Father Bishoy Kamel was born in Egypt on September 18, 1961 as Maurice Kamel Tadros.

After graduating he went to work as director of the Center of St. Mark for languages ​​and conferences in Nasr City - Egypt.

Maurice married Samira in January 1997, after which she had two children: Marco and Verena.

On October 3, 1997, he was appointed by the priest Bishoy by Anba Boula, bishop of Tanta, after which he served in the church of St. Mercury Abu Sefein and Prince Tadros in Tanta - Egypt.

In August 2003 father Bishoy came to the Netherlands with his family and in August 2004 his service started in our church in Utrecht.

On 1 May 2015, he was promoted to Hegumen by His Holiness Pope Tawadros II of Alexandria.