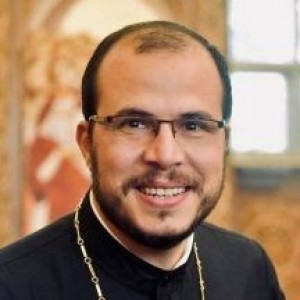 Father Daniel Haleem Tyab was born Malak Haleem Tyab in Beheira, Egypt on April 26, 1978. From a young age, he was highly involved in church services and activities, with a special appreciation for the hymns of the Coptic Church. He served in St. Mary Coptic Orthodox Church in Beheira as an active deacon and Sunday School servant. He continued serving at St. Mary’s until 1999, when he focused his services on a weekly meeting he held in Cairo with his friends and colleagues, who were sojourners like him from various regions of Egypt, coming to earn their degrees from Cairo University. In 2002, he graduated from Cairo University with a degree in Pharmacy. Promptly after, he moved to Queens, NY, where he served at St. Mary & St. Antonios COC as a deacon. In 2005, he moved to Cleveland, OH to work as a pharmacist.

In St. Mark COC of Cleveland, Malak served both as a deacon and as a youth servant for ages ranging from elementary to college to post-graduate. Having been taught many hymns by his older brother and mentor, Father Aghathon Haleem Tyab, his love for this aspect of worship never left him; thus, he also served as a hymn teacher.