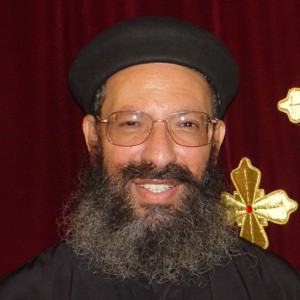 Archdiocese of the Coptic Orthodox Church

On March 1st, 1950 Hanna Demetrious was born in Minia, Egypt, the third of six sons of the Very Reverend Father Demetrious Girgis. He was ordained a deacon at a young age and loved the prayers and hymns of the Church. In 1972, he graduated from the Theological Institute of Alexandria. Upon graduation, he served as a dedicated deacon (Shamas Mouqarras), Brother Hanna, at St. Reweis Coptic Orthodox Church (the Patriarchal Cathedral) in Cairo, Egypt from 1972-1973. He then served as a dedicated deacon in Alexandria, Egypt from 1973-1974 and also taught hymns (Alhan) at the Theological Institute. Hanna was then entrusted by His Holiness Pope Shenouda III to assist Fr. Antonious El-Anba Pishoy (the late Bishop Bemen) and on November 24th, 1974 Hanna left Egypt to serve as a dedicated deacon in our church of St. George & St. Shenouda in Jersey City, NJ. In 1975, he returned to Egypt to serve as the personal deacon to His Holiness Pope Shenouda III. At the request of the late Father, Hegumen Ghobrial Abdelsayed, Deacon Hanna returned to the United States in April of 1975 to serve in our church of St. Mark in Jersey City, NJ.

On the historical first ever visit of a pope of the Church of Alexandria to the United States, His Holiness Pope Shenouda III informed Deacon Hanna that he was to be ordained a priest, at which point God directed him to choose Ms. Sonia Shahid, a faithful servant at St. Mark’s Church in Jersey City. They were married on May 14th, 1977 at St. Mark’s.

On May 22nd, 1977, during the celebration of the Divine Liturgy in our church of St. Mary & St. Antonious in Queens, NY, His Holiness ordained Deacon Hanna as Fr. Bishoy Demetrious. Pope Shenouda placed Fr. Bishoy to shepherd the flock of St. Mary, a newly formed congregation in East Brunswick, NJ. This was the first ordination on American soil by His Holiness, Pope Shenouda III. Fr. Bishoy returned to Egypt with His Holiness, where he spent his 40 days of preparation at the Monastery of St. Pishoy.

On August 15th, 1977, Fr. Bishoy arrived in the US to begin his service at St. Mary’s. On the day after his arrival, Fr. Bishoy immediately began his ministry by visiting members of the congregation, as well as seeking and caring for the sick.

During his service at St. Mary’s, he attended St. Vladimir’s Seminary, where he prepared a Sunday School curriculum for the Church and also taught hymns and praises there. His Reverence then organized meetings for the Sunday School teachers and servants. He arranged weekly lessons in the church to teach the Coptic language, the rites and the hymns, as well as organizing programs for lectures. In addition, he created several committees, each for a specific function, such as the Ladies Committee, Bible Study, Youth, Sunday School, Summer Camp, Servants, and the Annual Festival.

Fr. Bishoy knew the power of fasting and prayer and therefore arranged in St. Mary’s Church, an annual three day fast with Liturgies for the service and for the Mother Church in Egypt (a tradition that is still carried on today). In July of 1986, Fr. Bishoy Demetrious was elevated to the rank of Hegumen. With the Grace of God and the guidance of Fr. Bishoy, what began as a few families, flourished into a large and successful church. As a wise and faithful steward, Fr. Bishoy steadfastly multiplied the talents given to him by God and reaped for his Master a fruitful increase of the small flock entrusted in his care.

Fr. Bishoy & Mrs. Sonia Demetrious were blessed by the birth of two heavenly gifts, Mariam (Mia) and Moniqua. Fr. Bishoy’s abundance of love extended beyond his own family and embraced the whole family of St. Mary’s.

The service of Father Bishoy was not limited to his local church. His Reverence was often called upon by different church communities to perform the Mysteries there such as Divine Liturgies, Baptisms, Marriages and Unctions of the Sick, until God bestowed a permanent priest for them. These communities stretched past New York & New Jersey to Pennsylvania, Missouri, Delaware, Connecticut, Mississippi, Illinois, Rhode Island, Ohio and even Canada.

Fr. Bishoy Demetrious was known to be a holy man, full of life; respected for his strong and courageous leadership; treasured for his faithfulness to tradition; cherished for his patience, consideration and courteousness; and beloved for his good humor and immense love for his flock and family. St. Mary’s Church was Fr. Bishoy’s wife and daughter that his reverence served for almost 32 years before he departed in peace on February 10th, 2009. May the Lord grant Fr. Bishoy the reward of a wise and faithful steward and repose his soul in the paradise of joy, “…The place out of which grief, sorrow, and groaning have fled away, in the light of Your saints” (Litany of the Departed).