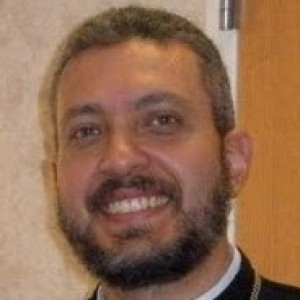 Father Marcos Ghali was ordained into priesthood on May 15, 1999 by the hands of H. H. Pope Shenouda III at the Patriarchal Chapel of St. Shenouda the Archimandrite at the Papal Residence at St. Bishoy Monastery, located in Wadi el Natrun, Egypt. Father Marcos was inspired by his uncle and namesake, the Very Rev. Fr. Marcos Ghali, who was the Patriarchal Vicar of Cairo at the Patriarchate under both H. H. the Late Pope Kyrillos VI and H. H. Pope Shenouda III for several decades. He first served in 1999 in St. Abraam Coptic Orthodox Church on Long Island, New York.

Since his arrival to Cleveland in October of 2004, Fr. Marcos has been a vital part of the activities of youth and assistance at the parish, including serving St. George Coptic Orthodox Church of Toledo with Fr. Mikhail E. Mikhail. He has taken part in the Midwest Youth Convention as well as Youth retreats for Northeastern Ohio, including Cleveland, Toledo and Youngstown.

In order to further expand his pastoral ministry, Father Marcos Ghali joined Ashland Theological Seminary. He graduated in 2010 with a degree in Master of Arts in Clinical Counseling. His professional credentials are Licensed Professional Counselor (LPC) by the State of Ohio Counselor, Social Worker and Marriage and Family Therapist Board. His professional association memberships include the American Counseling Association, the American Association of Christian Counselors as well as the Ohio Counseling Association. Father Marcos has completed his doctoral degree in Counselor Education and Supervision from Kent State University. He is looking to offer Professional Clinical and/or Christian Counseling for Adults, Adolescents, Marriage and Family Counseling Services.

As a result of the exponential growth at St. Mark’s Church in Cleveland, in July 2015 H. H. Pope Tawadros II has commissioned Fr. Marcos to start the ministry in the west side of Cleveland. Currently, Fr. Marcos serves at both churches of St. Mark in Seven Hills, and Sts. Peter & George in Westlake.