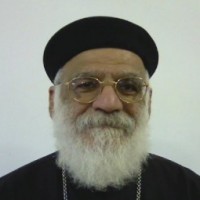 The Very Rev. Fr. Mikhail Edward Mikhail, D. Min. was born in Cairo, Egypt on August 2, 1949. From an early age, he was active in church life, and was fortunate to have several mentors who clearly influenced his life and guided him to a love for his church and its service. As a child and a young man, he was fortunate to be a student of several leaders of the Coptic Orthodox Church such as H. E. the late Metropolitan Agathon of Ismailia, Their Grace Bishop Antonious Marcos of African Affairs, Bishop Moussa of the Youth, Bishop Samuel of Shiben El-Kanater, the Very Rev. Fr. Ibrahim Aziz Guindi, and the late Rev. Fr. Roufail S. Michail. These mentors would all play a role in guiding the young Mounier Edward Mikhail to enter the Coptic Orthodox Theological Seminary in Cairo where he would come under the patronage and guidance of his most influential mentor, H. H. Pope Shenouda III,who was then H. G. Bishop Shenouda, Bishop of Christian Education and Dean of the Seminary.

The seminarian Mounier excelled in his studies and in his ministry, building friendships with faculty and students that would last a lifetime. Upon his graduation in 1972, Deacon Mounier was assigned by H. H. Pope Shenouda III to serve at St. Mary Coptic Orthodox Church in Masarra, Shoubra in Cairo. Subsequently, His Holiness assigned him to be the first consecrated deacon to serve in the United States. Deacon Mounier served for one year with the Very Rev. Fr. Youhanna G. Tadros at the newly established Coptic Orthodox Church of St. Mary & St. Antonious in Queens, New York. In his ministry, the energetic deacon participated in all aspects of the church’s liturgical and educational services. In the spring of 1974, Deacon Mounier was called back to Cairo, where he would be ordained to the priesthood by his teacher and mentor, H. H. Pope Shenouda III.

On May 11, 1974, Deacon Mounier married Seham Samuel, a Sunday School teacher from St. Mary’s Church of Masarra at the Coptic Orthodox Cathedral of St. Mark in Cairo.

On Friday, August 23, 1974, Deacon Mounier Edward Mikhail was ordained as the Priest Mikhail Edward Mikhail by H. H. Pope Shenouda III at St. Mark’s Cathedral. The pronouncement of ordination declared that the new priest would be ordained to serve the Altar of St. Mary’s Church of Masarra as well as the Coptic Orthodox Church in America at large. His Holiness the Pope had in mind sending Fr. Mikhail back to America to serve the immigrant communities there.

On April 30, 1975, Fr. Mikhail and his wife Seham, who was six months pregnant with their first child, arrived in Cleveland to begin his new ministry as the first resident pastor of St. Mark Coptic Orthodox Church. In addition, Fr. Mikhail would be given pastoral responsibilities over the smaller Coptic communities in Columbus, Dayton and Cincinnati in the State of Ohio, as well as in Pittsburgh, Pennsylvania and Minneapolis-St. Paul, Minnesota. All these communities would in due time receive their own resident priests, all due to the care and ministry of Fr. Mikhail.

The community, which was then about fifty families large, rented St. Paul’s Episcopal Church in East Cleveland for services. In 1977, prior to the first Papal Visit of H. H. Pope Shenouda III, the community purchased its first church building in Parma. This small church would become the home of the parish for nearly eleven years until the dream of a church built in Coptic style would be realized.

Fr. Mikhail, along with Mr. Ahdy G. Mansour, was appointed as delegates of the Coptic Orthodox Church in North America to the National Council of Churches of Christ in the U. S. A. in 1977 by H. H. Pope Shenouda III. This brought Fr. Mikhail to a national level of exposure to ecumenism and inter-church relations that he would use in his daily interaction with other churches and pastors in the Cleveland area.

At the invitation of H. H. Pope Shenouda III, Fr. Mikhail attended the first consecration of the Holy Myron (Chrism) at Pope Shenouda’s Patriarchate. While on this brief visit during the last week of the Great Lent of 1981, Fr. Mikhail was elevated to the rank of Archpriest (Hegumenos) by Pope Shenouda.

With the exile of H. H. Pope Shenouda III to the Monastery of St. Bishoy in the Fall of 1981 by President Sadat, Fr. Mikhail took a leading role with several of his fellow priests and lay leaders in seeking the release of our spiritual father and Patriarch. These activities included organizing, hosting, and attending several clergy conferences, presenting the issue to the National Council of Churches as well as a visit to Former President Jimmy Carter in Atlanta. Upon the joyous news of the return of H. H. the Pope to the Patriarchate in January of 1985, Fr. Mikhail joined a delegation of Coptic priests from North America who went to Cairo to greet His Holiness.

Always keeping theological studies as a priority in addition to his pastoral ministry, Fr. Mikhail joined Ashland Theological Seminary for graduate studies in 1982. Fr. Mikhail received a Master of Divinity degree in Pastoral Care and Counseling in 1984 as well as a Doctorate in Ministry in 1986. These two degrees would aid Fr. Mikhail in his daily ministry as well as encourage him to pursue the establishment of a Coptic Orthodox seminary in America. This dream became a reality as two Coptic Orthodox Theological Seminaries were established in 1989. Fr. Mikhail was instrumental in the development of these schools, along with several of his fellow priests, and would be appointed Academic Dean of the Los Angeles seminary. Fr. Mikhail continues in this post as well as being a professor of New Testament and Pastoral Theology. Fr. Mikhail is the author of several articles and books in both Arabic and English. The books include: Focus on the Coptic Family, St. Mary – the Mother of God, The Coptic Orthodox View on Homosexuality, The Greatest Acquaintance Party, 1000 Answers to 100 Questions and A Journey With the Church Fathers Through Lent, Passion Week.

With the blessings of Pope Shenouda III, the congregation in Cleveland began its plans to build a church in the traditional Coptic style. The new church complex was officially opened in 1988 and consecrated exactly one year later during the second Papal visit of H. H. Pope Shenouda in October 1989.

In the twenty-five years of Fr. Mikhail’s ministry, the congregation of St. Mark Coptic Orthodox Church of Cleveland has been blessed with numerous miracles. These blessings from heaven have provided a beautiful church complex in which the faithful can pray surrounded with architectural and iconographic beauty, which enhances their worship. The congregation has also been fortunate to be blessed on many occasions to host H. H. Pope Shenouda III, whose direct pastoral care provides spiritual nourishment. These blessings were crowned with the Miracle of Holy Oil seeping from the Icons of our Lord and Savior Jesus Christ and the Holy Mother of God, St. Mary. After personally seeing the Icons in January of 1991, H. H. Pope Shenouda III declared the phenomenon an official miracle in May of 1991.

Those of us, who have lived in Cleveland before Fr. Mikhail started his ministry, have witnessed a steady spiritual growth in our community, something like climbing a ladder. During the last 25 years all of us climbed; some slowly and some faster. Year after year and with each step any one took, he/she solidified his/her footing on to the next step. Each step taken up the ladder nourished the soul.

As a result, of the guidance of Fr. Mikhail in the past 25 years, there has been a potently revived interest in true Coptic Orthodox religious practices in terms that brought many people to God and to the church. Not only that, but also a deeper and more true commitment to orthodoxy. Today one can easily notice that there are more people who are observing the church teaching and true dogma in terms of fasting, using the book of Prayers, the Agpeya in daily prayers, and participating in the Holy Sacraments of Repentance and the Holy Eucharist. Not only are more people are now attending, practicing and offering their financial support to the church, but also are making extensive use of the Coptic Orthodox Lectionary, the Katamaros. In time and with the tireless efforts, services and prayers of Fr. Mikhail along with the blessings and guidance of H. H. Pope Shenouda III, we all will feel completely nourished and connected to God.