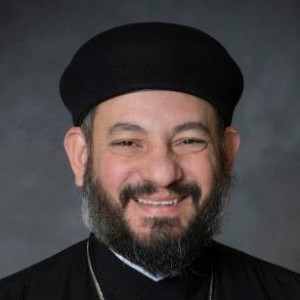 Fr. Pishoy was born in Giza, Egypt in 1970. He immigrated with his family to Toronto, Canada in 1984 where he completed his high school education. In 1993 he graduated from York University with a Bachelor of Arts majoring in Math and Statistics. He served at St. Mark’s Coptic Orthodox Church in Toronto as a youth counsellor until he was ordained as a priest in the same church on November 14, 1999.

On January 24, 2013, Fr. Pishoy received Queen Elizabeth II Diamond Jubilee Medal for his efforts in promoting diversity and multiculturalism. This medal is offered to “honour outstanding citizens for their dedicated service to peers, community and province”.

Fr. Pishoy is married to Tasoni Sandra and has three children: Mary, David, and Andrew. His hobbies include reading and playing sports (especially basketball and soccer).