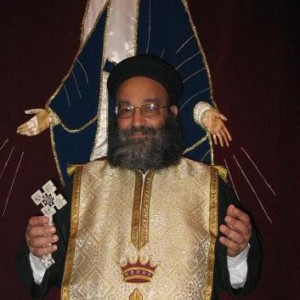 Abouna Sedarous was born Mahroos Abdelmaseeh Sedarous on March 22nd, 1949, in the city of Mallawi in the state of Minia in Upper Egypt to pious Christian parents. His father, grandfather and great grandfather were all priests and even many generations before them. He is the second child born out of seven siblings. Growing up, Abouna Sedarous was very active in his church and his first ordination as a young deacon was performed by His Grace Bishop Shenouda, who is now known as His Holiness Pope Shenouda III.

Abouna Sedarous is well known throughout Egypt, as he appears regularly on the Coptic Channel “Aghapy”, broadcast throughout the world, giving sermons and lectures. He is an authority on the Virgin Saint Mary, the Coptic language and Comparative Theology. He is a strong defender of the Coptic Orthodox faith and has authored numerous books in the Arabic language.