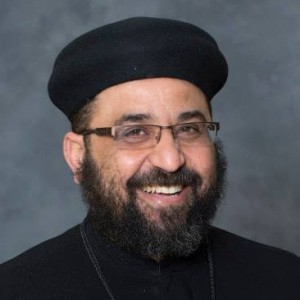 Fr. Moussa served in Kenya, Nairobi and many other parts of Africa for a period of eleven years, until August 2008, when he was called to serve in our esteemed church.

Fr. Moussa grew up attending church services in St. George and St. Abraam Church in Heliopolis, Cairo, Egypt where he became very actively involved in youth services during his college and throughout his career years.

In 1986, he earned a Bachelor Degree in Accounting from Ein Shams University, Cairo, Egypt. He practiced the accounting profession in Egypt until May 1997.

In Winter 1997, Fr. Moussa was called for priesthood service. Bishop Boulos, the General Bishop of Missionary Affairs called him and his wife, Aida for missionary service in Africa. In a very short period of time, Fr. Moussa responded to the missionary service call and he was ordained by His Holiness Pope Shenouda III on June 15, 1997 to serve in the Coptic Orthodox Church in Nairobi, Kenya.

In August 1997, Fr. Moussa and his wife, Aida moved to Nairobi, Kenya where they launched a very active Coptic Orthodox missionary service in this part of the world. Together and with many other servants, they established and ran the Coptic Hospital and the Hope Center for treating HIV patients in Kenya. With their devoted service, this hospital grew over the years to offer a full range of Inpatient and Outpatient care and the Hope Center became one of the biggest centers in the area for treating and caring for thousands of HIV/ Infectious Disease patients and their families.

In May 2006, Fr. Moussa was elevated by Bishop Boulos to the rank of Hegumen for the Coptic Orthodox Church in Nairobi, Kenya.

Fr. Moussa served in Kenya, Nairobi and many other parts of Africa for a period of eleven years, until August 2008, when he was called by H.H. Pope Shenouda III to resume a new service in St. Abraam Church in Long Island, NY.

Fr. Moussa continues to actively serve the congregation in St. Abraam Church in Long Island, NY since his arrival in September 2008. May God continue to bless his service for many more years to come.