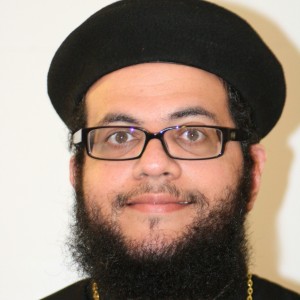 He holds a Bachelor of Arts in History from the University of California at Riverside and a Juris Doctor law degree from the George Washington University Law School in Washington, D.C. Prior to his consecration and ordination, he practiced law in California from 2003-2009.

With his family, he attended Holy Virgin Mary Church in Los Angeles, Saint Mina Church in Riverside, Saint John Church in Covina throughout his life. For the 21 years before his ordination, he served at Saint Abanoub and Saint Antony Church in Norco.

His father, the late Father Samuel Samaan of blessed memory, served as a presbyter in the Diocese from 1991 to 2007 at Saint Abanoub and Saint Antony Church in Norco.

In September 2008, he became a consecrated servant in the Diocese, assisting in several areas of the service. One year later, His Grace Bishop Serapion assigned him to serve at St. Demiana Coptic Orthodox Church in San Diego. On December 26, 2009, His Grace Bishop Serapion ordained him as Archdeacon Moses to continue his service at St. Demiana. On April 18, 2010, he was ordained as a presbyter by Their Graces Bishop Serapion, Bishop Sarapamon, Bishop Tadros, and Bishop Youssef.