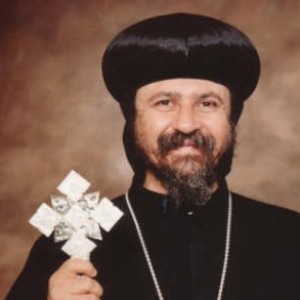 H.G. Bishop Daniel was born Adeeb Mikhail Andrawos on the 7th March 1959 to a pious Christian family in Atbara, Sudan.

Between 1998 and 2000 he completed short courses in Church Management, Financial Management, Conflict Management and Gender Awareness which were organised by Sudanese Council of Churches.

H.G. completed a Master Degree first class honour in Church History from the College of Coptic Studies, Cairo, Egypt in 2006. Currently he is undertaking a PhD thesis on “The relation between the Mother Church in Egypt and the Coptic Church in Sudan”.

He started his service in the Coptic Orthodox Church as Sunday school teacher in the parishes of St Mark & St George in Sudan and St Takla Hemanout in Alexandria, Egypt.

Became a monk in 1984 by the name Mettaous at the Monastery of St Anthony, Red Sea, Egypt and was ordained a priest in 1986 by the same name. In 1987 he was promoted to the rank of protopriest by the late H.E. Metropolitan Daniel of Khartoum in Sudan.

He was a member of the Executive Committee of the Sudanese Council of Churches from 1995 to 2000. During that period he chaired both of the Financial Committee and the donation Committee.

The late H. E. Metropolitan Daniel of Khartoum assigned to him the responsibility to preach to the Nubian orthodox people in the Nubian Mountains, (West of Sudan). He wrote a detailed report on the service of Nubian Mountains and the potential of its enormous population.

In 23 June 2002 he was ordained Bishop for Sydney, Australia and its Affiliated Regions by His Holiness Pope Shenouda III and was named H.G. Bishop Daniel.