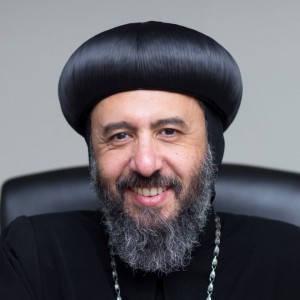 His Grace Bishop Angaelos was born in Cairo, Egypt in 1967 and emigrated with his family to Australia as a young child in 1973. He spent all of his childhood and early life in Sydney, obtained his Bachelor of Arts, majoring in Political Science, Philosophy and Sociology, and went on to do postgraduate studies in law whilst working in the same field.

Bishop Angaelos returned to Cairo in January 1990 to join the monastery of Saint Bishoy in Wadi-El-Natroun. He became a novice (by the name of Brother Arsenius) of the monastery, and was subsequently consecrated a monk (Fr. Angaelos) on 31st October 1990 by His Holiness Pope Shenouda III.
Father Angaelos remained at the monastery of Saint Bishoy, being administrator of the Papal Residence and Conference Centre there, and was secretary to His Holiness Pope Shenouda for a period of six years.

With the blessing and guidance of His Holiness, Fr. Angaelos commenced the publication the official internationally-circulated English magazine of the Coptic Church, ‘El-Keraza\' and remains the editor of this magazine, working with an international youth editorial and distribution committee that he established specifically for this purpose.

In June 1993 Fr. Angaelos was ordained a priest and continued his responsibilities in Egypt. In December 1995, he was delegated by His Holiness to serve as the first permanent parish priest for Archangel Michael & Saint Anthony Coptic Orthodox Church in Stevenage, England, while at the same time paying particular attention to youth ministry.

Fr. Angaelos developed and expanded his youth ministry in the UK as well as his local parish. He also established the Saint Athanasius Coptic Theological College at the Coptic Centre in Stevenage in 1997, which was officially inaugurated by His Holiness the pope.

Through the service of the past years, the Coptic Orthodox Church Centre is now also home to a number of activities including: ‘Saint Athanasius the Apostolic Coptic Theological College\', Coptic Orthodox Church U.K. Press and Public Relations Office, C.O.P.A. (Coptic Orthodox Publishers Association), ‘Saint Athanasius Papal Publication Centre\', ‘El-Keraza English Magazine\', as well as other local and general activities. The Centre also acts as the focal point for official and ecumenical relations between the Coptic Church and other bodies in the UK and abroad.

On 14th November 1999, Fr. Angaelos was consecrated as General Bishop, and Bishop Angaelos returned to the United Kingdom, whereupon he has continued to expand his ministry.

Since November 1999, His Grace has established the Joint U.K. Youth Committee, a national youth association, and the official Public relations office for the Coptic Church in the United Kingdom. He has also been nominated by His Holiness to oversee Archangel Michael and Saint Mary\'\'s Church in London, as well as matters at other churches that may arise from time to time.

Bishop Angaelos continues to specialise in youth ministry and is based at the Coptic Centre in Stevenage, but also travels extensively, lecturing to Coptic youth at various youth conventions and conferences throughout the world. In 2001, His Grace established graduate conventions in the United Kingdom, as well as on the East and West Coast of the United States, in New York (‘Kononia\') and Los Angeles respectively. His annually-attended conferences include:

Besides established annual conferences and conventions, he also travels to conduct local retreats and seminars in various Coptic dioceses and communities.

To support students a series of FOCUS (Fellowship of Coptic Christian University Students) has been established of various university campuses, and as part of his service for the youth and the community, Bishop Angaelos has established the ‘Coptic City Mission\', a group of youth who visit the homeless on the streets of London every week, distributing food, clothes and a comforting word.

To assist in active youth ministry, Bishop Angaelos writes a series of short spiritual publications and is the author of ‘The Altar in the midst of Egypt\', a brief introduction to the Coptic Church, a book published as an introduction to the Coptic Church, especially aimed at Coptic Youth and those of no previous interaction with the Church. In keeping with the needs of his ministry, Bishop Angaelos also personally oversees the maintenance of an up-to-date website for all service at the Centre in Stevenage www.CopticCentre.com and a website dedicate to youth ministry in the UK www.CopticYouthMission.com.

Bishop Angaelos was actively involved in a national multi-denominational conference for Christian youth workers called ‘Youthwork: The Conference\' in 2003, and has been the force behind the first broadcast of a series of interviews at prime morning time on Premier Christian Radio in the UK, introducing the Faith and History of the Coptic Church.

At the international level, in 2001 Bishop Angaelos accompanied His Holiness Pope Shenouda on his official visit to the Patriarchate of Constantinople in Turkey, and has also internationally officially represented the Coptic Church in the United Kingdom, Russia, Armenia, and on various other occasions, and he continues to do so. His Grace also attended the enthronement of the Archbishop of Canterbury as official envoy of His Holiness the Pope, and is on the official Anglican-Oriental Orthodox International Theological Commission.

At the official level, His Grace represents the Coptic Church in the United Kingdom at public and official occasions, and has been the guest of Her Majesty Queen Elizabeth II and His Royal Highness Prince Philip at official occasions, and at their Windsor Castle residence. He has also been host the The Very Reverend Dr. Rowan Williams, Archbishop of Canterbury during the archbishop\'s special visit to the Coptic Centre in May 2004.